In the 4 years since meeting on one of the many hikes with BC Mobility Opportunities Society, Rand and Jason have not stopped their adventures. Sharing a love of the outdoors and activities not found on the paths mostly travelled, they quickly formed a friendship. Although the hikes were as rewarding as they were challenging Rand’s unquenchable thirst for new and uncharted challenges was to take them much farther than the hiking trails.

Jason’s technical knowledge and athletic abilities were put to use finding inventive and creative ways for Rand to express his competitive nature. To allow them to not only train, compete, and experience many activities not easily enjoyed by someone with Rand’s physical abilities they had to overcome many challenges even before they hit the start line.

Neither of them being rich they had to be creative in their approach. Their first race entry was the BMO Vancouver half-marathon, for which they designed and built their first racing chair from scrap and donated bike and child tow along chariots parts. They started in the second corral and finished in 1:34!

Since then, they have completed an additional three half-marathons and have plans to enter the Whistler Gran Fondo in 2015 on a currently under construction tandem bike. But to date, their most thrilling accomplishment has been competing, and completing, the 2014 Tough Mudder in Whistler, BC. 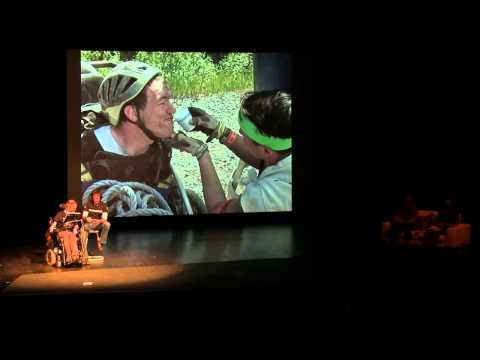